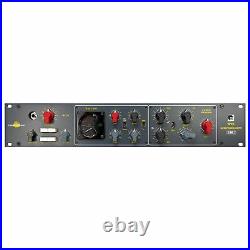 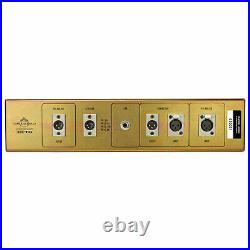 For the first time ever, Chandler Limited has recreated a channel strip from this legendary TG12345 console and incorporated different elements from its reign at Abbey Road during the late 60s and 70s. The TG Microphone Cassette is a full-featured mixing console channel strip which incorporates the timeless punch of The Beatles and Pink Floyd, thanks to expanded EQ and compressor/limiter (a new option in 1968). As master designer Wade Goeke has been apt to do with all of his Chandler Limited creations, the TG Microphone Cassette encompasses the design of classic Abbey Road gear and efficient modern amenities.

This 19-inch rackmount unit combines the brand's historic EMI/Abbey Road Studios series - TG1 Opto Limiter, TG2 Pre Amp/DI and TG12345 Curve Bender EQ, all in one. This is the first time since 1983 (when the desks ceased to be built), that all of the elements of the TG12345 console have been offered together in one concise package. Mic/Line: XLR Input (Transformer balanced, Mic 300O Impedance). Maximum gain: +70db, Coarse Gain (Stepped +20 to +60db), Fine Gain (Variable +/-10db).

TG1 Opto Limiter: Independently patchable (XLR I/O), Hold, Attack, Release, Knee (Sharp/Rounded), Output (makeup gain), Bypass, Linkable (1/4 Jack). Chandler Limited is the only company in the world authorized to develop, manufacture and market the "Official Equipment" of EMI/Abbey Road Studios. Abbey Road Studios, EMI, TG and their associated logos are trademarks of EMI (IP) Limited. Since 1993, we have been committed to equipping our customers with the very best gear, advice, and personal service anywhere. We believe that great sound can be achieved at any budget. We also believe that the ambitions of our customers should always come first. And over the years, those beliefs have turned customers into friends and family. Whether you're just starting out, or a seasoned pro, we're here for you, no matter where your audio travels may take you. Analog Outboard Gear - 1 Year. Microphones - 1 Year (excluding capsules, tubes, and ribbon elements). Speakers - 1 Year (excluding drivers).

Digital Outboard Gear - 30 Days. Note: Software is not returnable or refundable. What Are "Demo Deal" or "B-Stock" Products? Our Demo Deals and B-Stock products offer a unique opportunity to save big on near-mint condition, fully warrantied gear. These items have been opened for demonstration purposes and put back in the box without extended use.

All original factory accessories and packaging are included. This item is in the category "Musical Instruments & Gear\Pro Audio Equipment\Preamps & Channel Strips". The seller is "vintagekingaudio" and is located in this country: US. This item can be shipped to United States.