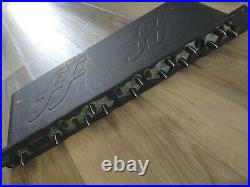 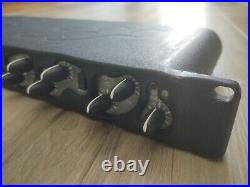 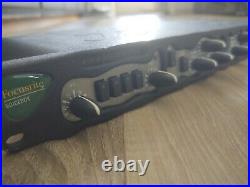 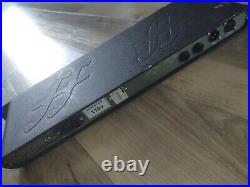 Focusrite Green 3 Voicebox Studio Channel Strip - Mic Pre/Gate/De-Esser/EQ/Compressor. In nice used condition and working well. Internally wired for 115v operation and including power cable. Recognizing that there are lots of quality-conscious project studio owners who would like to own Focusrite equipment if it could be offered at a more affordable price, Focusrite went back to the drawing board and came up with the Green range. Obviously, green anodizing isn't significantly cheaper than red anodizing, so more had to change than simply the color - and as you can see from the photograph, it has.

Focusrite wanted their new range to make a visual as well as an aural statement - which is why the front panels of the new units look as though they've been partly assimilated by the Borg! Non-Star Trek Next Generation fans can pretend they look like an aerial view of a golf course with Trident nosecones poking out of the bunkers.

It appears that the front panels and cases of the new range are all cast in one piece, though there could be an invisible join somewhere under the black crackle paint, for all I know. The double'f' Focusrite emblem is embossed on the covers, and the ends of the cases are curiously rounded. The green front panels appear to be mounted behind the black sculpted front covers, so that the control knobs and buttons peep through.

All the knobs have a conical profile and a tactile, rubbery feel, and the buttons are made of a similar material. Also sharing the mic amp is the NR (Noise Reduction) control, which sets the expander threshold. The expander, which operates with a 2.1 ratio, has a strangely-calibrated knob, in that it shows the worst-case noise level below 0dB on the meter; in other words, it shows how much residual noise you might expect to have left when the expander is operating. Though the Voicebox itself is about as quiet as theory allows it to be, the use of compression will reduce the signal-to-noise ratio of the input signal by the same number of dBs as the amount of gain reduction being applied. Careful use of an expander can minimize this, by applying'soft gating' during pauses. As compressors go, this one has very few controls - just three knobs and three buttons. According to the graphs in the manual, the compressor has a conventional hard-knee characteristic, with user control over the Threshold, Ratio and Makeup gain being provided. The attack and release times are pre-optimized for vocal use, but there's an auto-release function which can be switched in to deal with material that has unusual characteristics. This works by progressively slowing the release time if the input exceeds the threshold either by a large amount or for a long duration. Because compression reduces the level of signals exceeding the threshold level, a make-up gain control is necessary to restore the peak level. The remaining buttons bypass the compressor section and switch the level meter to read gain reduction. Following the compressor is a de-esser, and though the controls and side chain for this are quite separate from the compressor, the same VCA is used to restrain the signal gain.

In effect, a de-esser is a compressor that is particularly sensitive to high-frequency sibilance, of the kind produced by some vocalists when singing's' and't' sounds. When these sounds are detected, the de-esser pulls down the gain, to make the sibilant sounds less noticeable. A conventional Threshold control sets the level above which sibilant frequencies are treated, and a Bandwidth control determines which area of the audio spectrum is reduced in level. Simpler de-essers compress the entire audio spectrum, which can lead to unnatural gain-pumping effects. The de-esser's Bandwidth filter is simple to use but is actually quite complicated in terms of design.

A 3rd-order filter sets the low-pass point, with a 1st-order filter looking after the high-pass point; as the bandwidth is increased, the lower limit slides down the audio spectrum as far as 1kHz. At minimum bandwidth, the filtering applies only above 10kHz.

A 2nd-order, fixed-frequency filter operating at 1kHz is used in the side-chain circuit to ensure that low frequencies do not trigger the de-essing process. On voices, the EQ is simply stunning in its ability to create the desired tonality while leaving the voice sounding perfectly natural. Next in line is the equalizer, configured as three bands with variable frequencies. The low and high sections are shelving, while the mid-range can be swept between 300Hz and 3.3kHz. Though this isn't a true parametric EQ, the bandwidth can be set to normal or Notch - the Notch setting has a very high Q, specifically for attenuating awkward spot frequencies.

All three sections provide up to 18dB of cut or boost, though it is unlikely that much boost would be used in the Notch position, other than to identify problem areas or to create special effects. Finally, there's an output level control, which has an associated overload LED to warn of impending clipping. A recessed yellow LED indicates that the unit is powered up.

It would be difficult for the Voicebox to sound as distinctive as it looks, but it definitely rises to the challenge. However, while other vintage-style processors try to be distinctive by what they do to the sound, the Voicebox is characterized more by what it doesn't do. You might think that the signal path on your mixer is clean and transparent, but next to the Voicebox, most mixers start to show their weaknesses. For starters, the Voicebox has loads of headroom and a very fast transient response, so everything comes out sounding smooth and natural. Abrasive sounds usually occur when circuitry can't respond fast enough to the input signal, or can't accommodate its peaks, but there's none of that here.

The mic preamp behaves perfectly in every way and the expander proves to be so transparent that it's hard to tell it's on at all. The only thing you notice is the silence between sounds. Checking out the compressor was also a revelation - vocal levels are controlled more positively than on just about any compressor I've tried, other than possibly a top-end Aphex, yet there's little subjective evidence of processing, even at very high levels of gain reduction. What's more, the compressor doesn't seem to push the louder sounds away, as some compressors tend to do - even the most uneven performance is levelled surprisingly naturally. The de-esser, too, manages to clean up normal amounts of sibilance without causing the sound to dip or lurch - no doubt the clever filter arrangement is behind this.

If you really over-process, you can hear the sound becoming just slightly dull whenever the de-esser is triggered, but when set up properly, it's wonderfully transparent. Focusrite have a strong name in the EQ business, so I was expecting great things from the Green EQ section - and it didn't let me down. EQs normally come as'gentle and musical' or'firm and ruthless', but Focusrite have managed to create an EQ that really digs into a sound and changes it, yet without making it unnatural. Even when you crank on 10dB of top end, the sound just gets crisper.

It's the same at the bass end - you can add as much warmth and punch as you like, but there's no lack of clarity or loss of mid-range definition. It might sound like magic, but again, it's down to well-engineered circuit design and an appropriate choice of filter characteristics.

When you boost top end using a cheap EQ and the sound becomes harsh, it's not the extra top that makes the sound rough - it's the circuit's inability to remain'linear'. The Voicebox may be part of Focusrite's affordable range, but it is still quite expensive by comparison with other'voice channel'-type products. However, I think its performance justifies the price premium, and while there is an attraction in using tubes, FETs or photocells to recreate vintage effects, there are occasions when you want to feel that there is nothing at all between you and the original sound. It's very difficult to set up the Voicebox to sound bad.

Indeed, to be cynical for a moment, part of the reason for the popularity of Focusrite gear may be that producers and engineers know that they can get great sounds without having to be all that precise when setting up. It's as though the technology is on your side for a change! In fact, the only minor disappointment is that there's no line input on the Voicebox - the equipment is designed first and foremost to satisfy the ears, and it doesn't disappoint. This item is in the category "Musical Instruments & Gear\Pro Audio Equipment\Preamps & Channel Strips". The seller is "nfssales" and is located in this country: US. This item can be shipped to United States.