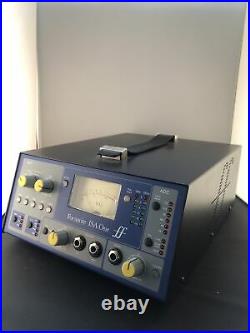 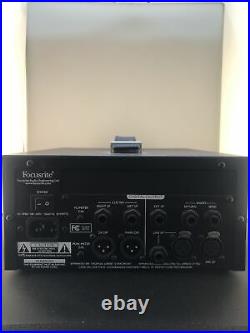 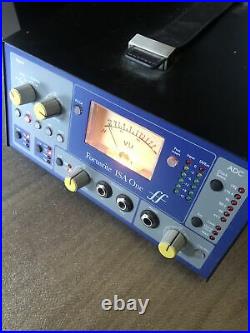 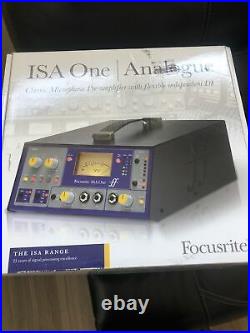 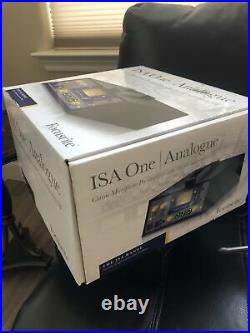 Focusrite ISA One Classic Single Channel Mic Pre Analog Microphone Preamp ISA1. Item is in full working condition. It has been treated with love and care over the years. My loss is your gain.

Classic vintage microphone preamplifier at a groundbreaking price. The ISA One microphone preamplifier delivers Focusrite's prestigious ISA transformer-based preamp in a rugged and portable chassis, at a groundbreaking price. ISA One features the classic vintage microphone preamplifier topology from the original ISA 110 module, including the Lundahl L1538 transformer and bespoke zobel network. The original 110 pre amp formed the cornerstone of each channel of Focusrite's legendary Forte console. The pre-amp is complemented by a line input (XLR and TRS Jack) and an independent DI channel, complete with dedicated gain control, active or passive impedance switch, a TRS Jack output for routing to an amp and an independent XLR output on the rear.

This flexible independent DI makes the ISA One ideal both for engineers wishing to blend a DI'd guitar signal with a mic'd guitar cabinet, and for demanding performers who require a single classic solution for both guitar and vocals. A variable impedance circuit has been added, allowing the user to switch between four carefully selected input impedance settings.

In addition to the original ISA 110 impedance, three further impedance settings allow perfect matching, or creative mismatching of the pre amp with any microphone. ISA One also features an insert point, should the need arise to place extra processing between the preamp or DI, and the optional converter.

Phantom power, phase reverse and a 75Hz, 18dB/octave high-pass filter are also available from the angled front fascia. Independent input metering for both channels is provided in the form of a moving-coil VU meter with variable calibration to suit analog and digital recording media, alongside two six-LED peak meters; inputs can be metered either pre- or post-insert. The meter calibrations utilize all the same reference points as Digidesign's Pro Tools HD system, allowing effortless line-up. An optional state-of-the-art stereo A/D converter is also available (the same card as used with the ISA430 Mk II), embodying cutting-edge conversion technology seated within Focusrite's custom analogue circuitry. This optional card can be retrofitted at any time and provides two channels of 24 bit/192kHz A-D conversion with a dynamic range of 119dB.

The topology has never changed, except for the addition of a variable impedance circuit, allowing ISA users to either perfectly match the preamp with any microphone, thus maximizing level, or to use different settings creatively to shape the sound of the microphone being used. The original ISA 110 setting was supplemented by three further impedance settings. The Focusrite preamp is renowned for its transparency, but there's also that subtle warmth that transformer core saturation contributes.

This seeming contradiction of warmth plus beautifully open, unrestricted high frequencies, is a classic hallmark of the mid'80s Focusrite designs. With processors whose bandwidth is strictly limited to the audible (20Hz to 20kHz) bandwidth alone, significant roll-off can still occur, affecting the higher audible frequencies of the signal. Therefore, in order to capture every subtle nuance, exactly as it occurs whilst avoiding any roll-off, the preamp must operate over a far greater bandwidth. The extremely broad frequency response of Focusrite preamps close to 200kHz at the top end guarantees accurate phase response across the much narrower range of human hearing, the roll-off point being moved entirely outside of the audible hearing range. ISA Series Transformer-based preamplifier Encased in a rugged and portable chassis, ISA One offers the classic Focusrite microphone preamplifier at its lowest cost to date.

Switchable Impedance Choose one of four carefully selected input impedances, including the original ISA 110 setting, to suit any microphone. Optional Stereo 192kHz ADC This optional card embodies cutting-edge conversion technology, incorporating Focusrite analog circuitry to deliver the best A/D performance in its class (Dynamic range of 119dB). Headphone Output with Volume Control ISA One can feed either a sum of the two inputs to the headphones output, or an external stereo cue mix (such as a stereo mix feed from an interface) via two TRS Jack inputs on the rear of the unit.

Dedicated Insert Point Allows you to place extra processing between the preamplifier or DI and the optional converter, such as an EQ or compressor. This optional state-of-the-art stereo A-D converter (the same card as used with the ISA430 Mk II), embodies the cutting-edge conversion technology seated within Focusrites custom analogue circuitry. Headphone Output with Volume Control. ISA One Classic Single Channel Mic Pre Specifications. Gain range: 0dB to 60dB in 10dB steps + 20 dB of variable gain.

Roll off: 18dB per octave 3 pole filter. Fixed Frequency 75Hz measured at the 3dB down point. Moving coil (MC) meter is factory calibrated to 0VU: +4dBu with 1kHz sinewave. With the VU Cal button pressed the meter can be adjusted on the rear panel to allow 0VU to equal +10dBu to +26dBu with the centre detent being equal to +22dBu. Peak LED meters calibrated in the detent position for 0dBFS: +22dBu, calibration is adjustable on the rear panel to allow 0dBFS to equal +10dBu to +26dBu.

Routing for MC and Peak1 meter is after the HPF, pre insert send or switched post insert return. Peak2 is always pre ADC channel 2, which can be fed by external input or Instrument input. LED levels are as follows when peak calibration is set to center detent on the rear panel. (This is when using the internal ADC). Mic input: XLR x 1.

This item is in the category "Musical Instruments & Gear\Pro Audio Equipment\Preamps & Channel Strips". The seller is "qwikneasy" and is located in Verdi, Nevada. This item can be shipped to United States.