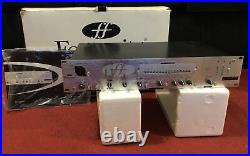 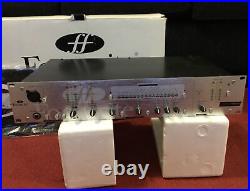 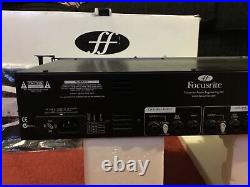 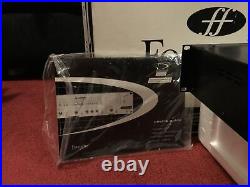 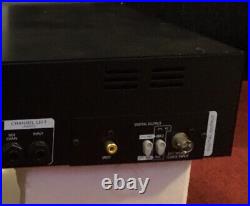 Focusrite Penta Preamp/Compressor with add on SPDIF Digital Card. The Penta has been designed to function both as a mono mic, line, or instrument processor, and as a stereo line-only processor. The front panel of the 2U box shares the distinctive Platinum styling, and carries sockets for the balanced Mic Input and high-impedance Instrument Input. Dual balanced line I/O is provided via rear-panel TRS jacks and a further pair of TRS sockets provide unbalanced side-chain access. The outputs can work at +4dBu or -10dBV reference levels, depending on the position of a switch by the output sockets. Plugging into the mic or instrument inputs, or into the left channel's line input, causes the unit to operate in mono, outputting only on the left channel. On the other hand, feeding signal to both line inputs allows for stereo operation. Front-panel switches select whether mic/instrument or line inputs are used, and activate the mic input's phantom power, high-pass filtering and phase inversion. A single Input Gain control operates on the selected input and a pair of eight-section LED meters show the input level following this control. The preamp is a discrete Class-A design with a frequency response only 3dB down at 85kHz, and with extremely good noise performance, even when I tried it with electric guitars and basses. The preamp architecture is similar to that used in the Focusrite Voicemaster, except that FETs are used instead of bipolar transistors. One advantage of this is that the circuit then behaves much more politely under overload conditions, approximating the soft limiting of a valve. Maximum mic gain is 60dB. Occupying the centre of the front panel is the main compressor section where a horizontal row of LEDs is used to indicate which preset is active. Buttons at either end of the row allow navigation through the presets, which is all easy enough, though I found the preset names difficult to read in typical studio lighting conditions, especially against the glare of the status LED. Unlike some other preset compressors, the Penta features a full set of parameter controls with which you can tweak the action of any of the presets. There are rotary pots for Compression (threshold), Make-up Gain, Ratio, Attack, Release and Tube Sound, plus switches for Compressor In, Soft Knee and Tube Sound In.

Ingeniously, the Ratio, Attack and Release controls always operate from a detented centre position to provide both positive and negative adjustment - in other words, if these controls are left centred, the preset works exactly as programmed by the designers. The teardrop-shaped switches have integral status LEDs and an eight-section LED meter shows any gain reduction being applied.

The Penta's presets make it easy to get instant, usable results, but there is also a full set of controls for further fine-tuning. The 16 presets are optimised for the most common musical applications: Kick, Snare, Ambient, Loop, Bass Guitar, Synth Bass, Percussion, Acoustic Picked, Acoustic Strum, Electric Guitar, Piano, Keyboards, Vocals, Crunch, Mix (Pump) and Limit. Crunch is designed for use before guitar overdrive devices. A table in the back of the manual shows the ratio and hard/soft knee status for each of these presets as well as whether the tube simulation is used or not. However, the threshold, attack and release settings are not divulged. To the right of the front panel lies the Output control section, sporting an Image Width control, with it's own bypass button. This manipulates the stereo width of the audio by feeding some phase-inverted left-channel signal to the right channel, and vice versa. The advantages of this system are that the results are always mono-compatible - any added information is cancelled when the channels are summed. Stereo metering of the output level is via two eight-segment bar-graph meters, and a further LED shows whether the optional digital card is being clocked internally or externally. This item is in the category "Musical Instruments & Gear\Pro Audio Equipment\Preamps & Channel Strips". The seller is "cardioid2" and is located in this country: US. This item can be shipped to United States.