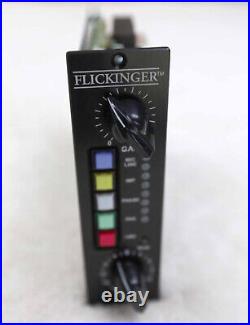 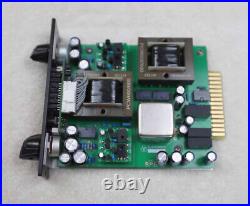 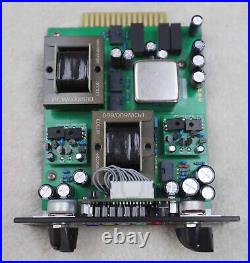 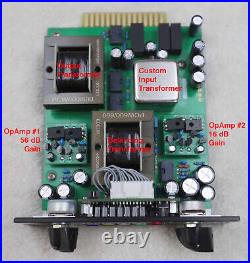 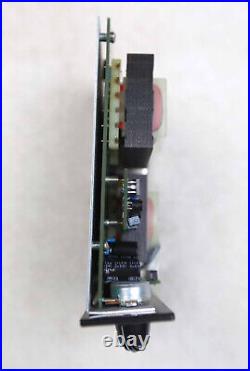 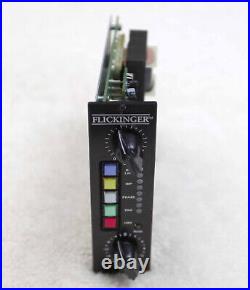 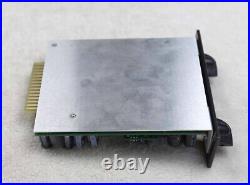 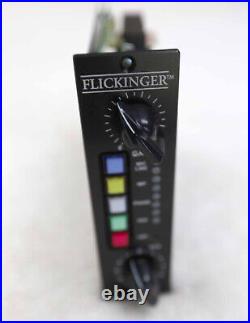 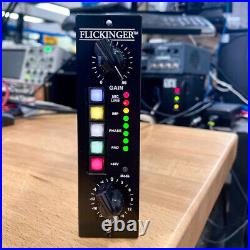 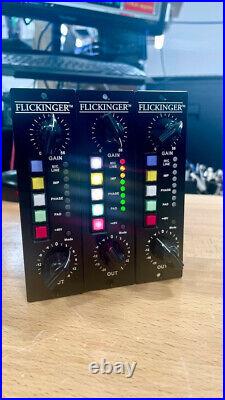 FLICKINGER AUDIO Flick 500 Mic Preamp for 500-Series Dual OpAmp, 3-Transformer, 72 dB Gain, 2-Gain Stage, +/- 24V Up for consideration is our brand new Flickinger Audio Flick 500 -- a 72 dB, dual-OpAmp mic/line preamp for 500-Series. The Flick 500 is a meticulously reproduced preamp from a vintage 1972 Flickinger 736-2 console channel card, with its prized 535-7 opamp, and we have added a few modern features, most notably a 2nd fader knob -- powered by a 2nd Flickinger 535-7 opamp --which more closely resembles the signal path of the Flickinger console, giving a total of 72 dB of gain. This gives you the flexibility to drive the main gain stage harder by cutting back on the output fader.

Lastly, we added a 4-mode metering system to help you better control levels. Flickingers's still have that great vintage American studio console character and tone that imparts a creaminess and heft to your tracks.

The low-end is full and powerful, and the +/-24V design gives you lots of headroom. Closely reproducing the 1972 vintage 736-2 Flickinger channel card and OpAmp design -- these preamps still sound magnificent today -- and are one of very few built to the vintage 150-Ohm / 24V spec, which is where a lot of the Flickinger magic comes from. FLICKINGER TWIN FLICKS CUSTOMER REVIEW Yes; I have a TwinFlicks. A couple of thoughts: It sounds just like the Cinderella Studios Flickinger console. Listen to the samples on the Cinderella Studio site and you'll hear what these channels do.

The sonic footprint is all over those tracks. The bottom end is brought forward, big time! And boxy mids are non-existent. I read reference to a "thick-flick" opamp somewhere.

I'm not sure what the thick ones are modeled after, but the TwinFlicks aren't thick sounding to my ears. The low, 150 ohm, impedance is very much a part of this circuit.

To my ears it's what brings the lovely bottom end forward. The impedance button has an effect, and it's probably useful with dynamics mics (I haven't tried them yet), but running a condenser mic with the low impedance is the bomb!

- While I haven't, yet, tracked drums, I'm pretty confident that these will really shine in that application. Oh, and they sound fantastic. - quoted from REAL GEAR ONLINE We have designed the preamp to behave like a mic/line channel from the vintage (Nashville Sound Lab / Ray Stevens) 36-Ch Flickinger console -- with both the mic and line inputs going through the entire circuit: input transformer, 1st gain stage, interstage transformer, 2nd gain stage and output transformer.

The idea for the unit is to have gain stage 1 behave and sound identical to the vintage 1972 Flickinger channel card, and then by cascading a second opamp to the gain stage, we can increase the total gain to 72 dB, while adding flexibility and control like you would see on the vintage console. So far, the response from our first production run of 100 + TwinFlicks units has been extremely positive. For example, we have one guy in LA who bought 4x units and has 8 channels going to Ampex 8-track. Another guy got it for kick and snare, and another guy is dedicating it to electric guitar, and another customer LOVES it for the saturation you get by overdriving the input stage, as it is a very pleasing, subtle saturation distortion without the typical solid-state harshness, and he uses it mainly to get that soft saturation sound. Another guy in LA actually bought it to use as a line-level conditioner, and believe it or not, he replaced his mastering comp with the TwinFlicks, and runs all his final mixes through it!! Several others are running mixes through the TwinFlicks as well. Another customer is putting together an all Flickinger 24 channel Paul Wolff / FIX Audio console with 24 channels of our Flickinger preamps and our upcoming 500-Series EQ. Thanks for shopping with Flickinger Audio / Cathedral Guitars!! This item is in the category "Musical Instruments & Gear\Pro Audio Equipment\Preamps & Channel Strips".