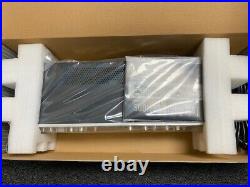 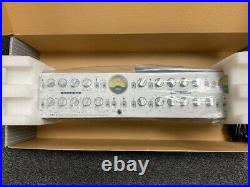 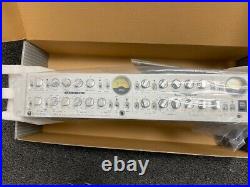 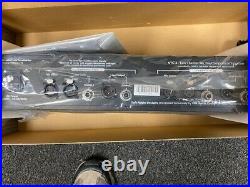 These are brand new old stock. Never been opened or used! Below is a review by SOS... Toft Audio have updated some pedigree vintage designs which offers two channels of mic preamplification, compression, and EQ.

Toft Audio is the brainchild of Malcolm Toft, and Alan Hyatt of PMI Audio, who convinced Malcom to join him at PMI Audio to create the Toft product line. Malcom, who started out as a recording engineer in the'60s at London's Trident Recording Studios, before becoming involved in the production of several revered console designs for Trident Audio Developments, such as the'A' range, Series 80 and TSM. The 2U ATC2, provides two recording channels, each comprising mic preamp, equaliser and dynamics.

The individual circuit stages have been derived from established designs: the mic preamp is the same as that employed in Toft's recording consoles, and the dynamics and equaliser sections apparently borrow heavily from some of the vintage Trident designs. The ATC2 is a surprisingly compact unit which extends only about 145mm behind the rack rails. The thick front panel is finished in silver with black legends, while the rest of the case is black with white legends on the rear panel.

The unit's connectivity is comprehensive, each channel boasting separate electronically balanced mic and line inputs on XLRs, plus an additional parallel TRS socket for the line input. This is also balanced, even though the rear panel suggests it is unbalanced it can, of course, accommodate unbalanced quarter-inch plugs. The output is provided on both electronically balanced XLR and TRS sockets.

There is also an unbalanced instrument DI input on the front panel for each channel. The only other facility on the rear panel is the ubiquitous IEC mains inlet, with integral fuse holder and voltage selector.

It is worth noting that channel one's I/O facilities are directly behind channel two's controls, and vice versa which can be confusing when plugging the unit up by leaning over from the front! Internally, the unit comprises two high-quality PCBs, one which covers the entire base of the case, and a second board which is roughly half as deep mounted above to carry the top row of front-panel controls. The electronics are all standard-size components, and all the ICs are in sockets for easier servicing.

A small toroidal transformer is mounted on the right-hand side of the case. The microphone input is handled by a Burr-Brown INA217 chip, which is Texas Instruments' pin-compatible replacement for the well-known but obsolete SSM2017. The INA217 boasts excellent noise performance for 200 microphone sources, and extremely low distortion characteristics even at high gains. All the other active devices are'common or garden' TLO72s, with a single socketed FET to provide the gain reduction in the dynamics section.

The two channels are laid out identically side by side, with the preamp and dynamics controls grouped in the top row and the equaliser along the bottom. A circular VU meter provides output-level or gain-reduction metering. The preamp section simply offers a mic/line selector toggle switch, the rotary gain control (with a light detented feel), and a phantom-power switch with an associated LED. The gain range spans +6dB to +60dB in mic mode, and ±20dB in the line mode. The level calibration seemed a little off here and there on the review model.

To achieve a 0VU output meter level, a balanced line input of +6.5dBu was required on one channel, and +5.2dBu on the other (with the gain set to its central unity position). This may be a side-effect of the detented gain control, which causes the gain to jump in steps of roughly 1dB, and also makes it difficult to precisely match the gain between the two channels.

Both channels produced balanced output levels of -1.4dBu for a 0VU output meter reading which seemed at odds with the handbook's suggestion that the unit's nominal operating level is +4dBu. However, we were unable to carry out further testing before we went to press. The instrument input automatically overrides the mic and line inputs, but the gain control still adjusts the gain over about a 36dB range. The DI input has an impedance of over 100k.

The compressor section is based around an FET as the controlling device as opposed to the more common VCA, variable-'Mu' valve, or optical systems. FET-based compressors were popular for a period in the late'70s and'80s, before cost-effective VCA designs became available, and include such venerable units as the Urei 1176. This particular design is based on that used on Trident consoles in the 1980s.

The ATC2 provides four continuously variable controls to set the attack, release, ratio and make-up gain, along with a toggle switch to bypass the processing (an LED illuminates when the dynamics section is switched in) and another to switch the VU meter to show the amount of gain reduction. Whereas most compressors provide a threshold control to determine the point at which compression is applied, the ATC2 has a fixed threshold (around -8dBu). So to achieve a desired degree of compression the input level control has to be used, in conjunction with the ratio control. Variable make-up gain of up to +20dB is provided to compensate for the inherent reduction in peak level when the compressor is operating.

Strangely, this control also allows the output level to be reduced by up to 50dB. The handbook provides no specifications for the attack and release settings the controls are simply marked'F' and'S' at their extremes. However, the fastest attack does appear to be very fast, and the release control spanned a useful range for voices and instruments.

The release time also appears to be programme dependent, since following large amounts of compression the release time is initially quite fast but then slows as the gain reduction recovers closer to zero, This approach helps to avoid audible pumping effects. The ratio control ranges between 1:1 and 12:1. As before, the level calibrations don't quite tie up.

With a 0VU signal on the meter, switching the compressor section in (with 1:1 ratio and the make-up gain set to unity), resulted in a 2dB drop in output level. It's a small point, but one that could become frustrating in some circumstances. Lurking between the two sets of channel controls is a'Couple' switch which ties the compressor side-chains of the two channels together for stereo working. The configuration is such that the channel generating the highest side-chain signal will determine the amount of gain reduction applied equally to both channels, but it is important to set all four controls identically for both channels. The lower row of controls is associated entirely with the four-band equaliser, which is similar to that of the Trident Series-80 console. The bottom and top bands have a shelving response with switchable turnovers (60/120Hz and 8/12kHz). The two mid-bands have continuously variable centre frequencies, spanning 100Hz-1.5kHz and 1kHz-15kHz, but the bandwidth (Q) of these filters is fixed. The gain controls of all four bands span ±15dB boost/cut and have centre detents for unity gain. An overall EQ bypass is provided (with the obligatory LED), and there is also another toggle switch to select a 50Hz 12dB/octave high-pass filter. The panel layout doesn't make the circuit topology clear at all, but in fact the equaliser is placed in advance of the compressor.

This is a common practice, and means that boosting low frequencies, for example, will cause the compressor to work harder on the low frequencies than the mid-range and high frequencies. The ATC2 is very simple to operate and everything works pretty much as expected.

In terms of sound quality, the ATC2 does a workmanlike job, with an emphasis on musicality. The mic input stage is simple and without frills, but it is also quiet and clean, with plenty of headroom and low distortion. In comparison with high-end preamps, the sound is generally smaller and more constricted, but it does a reasonable job for the price. The instrument DI input is a useful extra facility which will appeal to many, and although the quoted input impedance isn't as high as in many designs, it certainly worked well enough in practice with electric guitar and bass.

The equaliser section is versatile, and the frequency ranges and overlaps have been well chosen. Likewise, the choice of bandwidth is a fair compromise between being narrow enough to enable surgical corrections when necessary, and being broad enough to allow subtle tonal shaping. The inclusion of a separate high-pass filter is very welcome, as is the ability to switch the EQ out completely. The dynamics section does all that it should, although I would have liked more informative legends on the controls, with intermediate values in addition to the extreme positions to make it easier to note down settings between sessions and projects.

Some specific values on the attack and release controls would have been nice too. The adoption of a fixed-threshold design works well enough in practice, although I can't fathom the idea behind a make-up gain control that also reduces the signal level by up to 50dB. Had it gone all the way down to silence it would have been useful as an output fader, but as it is I can see no practical application for it at all. The FET design does, indeed, have a certain sonic character which is recognisably different to that of an optical or VCA compressor.

It tends to be a little harder-sounding perhaps, and more precise than an optical compressor, but slightly cleaner and more musical than some VCA designs. With careful setting up it is virtually transparent when used for modest amounts of dynamic control, but can be used to add a distinctly punchy character to the sound when driven harder. The market for voice processors, which is essentially what the ATC2 is, is very buoyant and fiercely competitive.

The ATC2 has the advantage that it is a dual-channel unit which can be used equally for tracking or mixing applications, with mono or stereo signals although I have some reservations about the accuracy with which the two channels can be aligned to each other for stereo. In terms of the cost/functionality balance of the ATC2, its closest competition in the UK is from products like the Focusrite Platinum Mixmaster, but single-channel units (at roughly half the price) include the Focusrite Platinum Voicemaster, SPL Track One, Drawmer MX60, and Dbx 376 (more expensive, but with a digital output). These are all well-respected units offering variations on the basic theme, and selecting which is the most appropriate in any particular circumstance can only be a personal decision. That the ATC2 can be listed in such company says all that needs to be said.

If you are in the market for a comprehensive but affordable analogue processor, the ATC2 must be added to your evaluation short list. The item "Toft Audio ATC-2" is in sale since Thursday, February 18, 2021.

This item is in the category "Musical Instruments & Gear\Pro Audio Equipment\Preamps & Channel Strips". The seller is "alanmhyatt" and is located in Gardena, California. This item can be shipped to North, South, or Latin America, all countries in Europe, all countries in continental Asia, Australia, South africa, New Zealand, Egypt, Reunion.